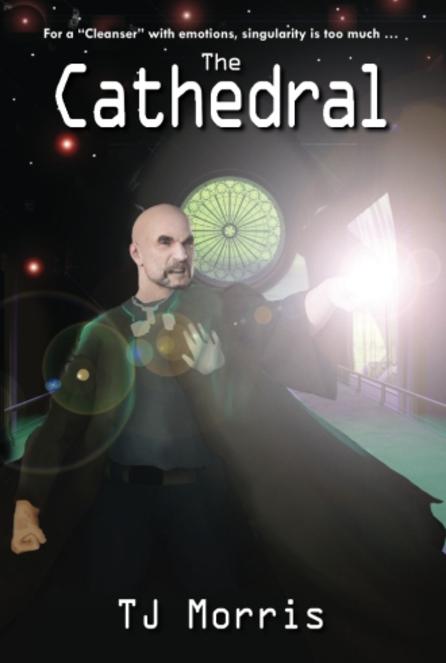 His given name was But for the Love of Jesus Christ We Would All Be Damned Smith, III, BC for short.  The name was peculiar to BC’s societal caste.  Some thought of it as a profession but you had to be born a Cleanser.  This fact was inconsequential to the rest of the passengers aboard the earth bound shuttle.  His clean-shaven head gleamed in the artificial light as he moved toward his seat.  “Cleansers” had precedence over everyone but a higher-level Cleanser in all aspects of society.  This status was fine for the sociopathic, but for one with emotions the singularity was often too much.

The lack of gravity made transit to the only port seat in the cabin clumsy.  With a shrugged thought BC powered up his personal field and utilized the electromagnetic flow generated to attract his entire body to the metallic surface of the floors.  Like a druid of old, his heavy leather cloak and austere looks were only perpetuated by the aura of electricity that seemed to crackle around him.  Other passengers shared looks with each other in deference to this mercenary representative of the Church’s Central Council. It was rumored that the glance of a Cleanser was sufficient to cause death at the most, or impotence at the least.  BC almost chuckled at the ill-founded suspicions knowing well the mental and physical strength required to end the existence of another human being.

The Cathedral   by TJ Morris

Initial feedback from me is...really enjoying your writing style and characters. The action sequences are very well done. Word choice is very good also--nice variety. The space opera universe you have created is fun and I like the way you are revealing it to the reader. It reads better than Frank Herbert's Dune series, similar to his son Brian Herbert and Kevin J. Anderson writing the Dune prequels which are better written. Also like your female character Raysa so far. Great job so far!

--Bruce Gehweiler, co-author of "Where Angels Fear" with C.J. Henderson

I'm definitely enjoying the world and the characters, but I haven't completely uncovered the plot yet (though I have an inkling where it's going). Descriptions are colorful, but not so much as to sound amateurish--good balance. The action is tight, and I'm impressed with the fight scene in the elevator (it's SOOO hard to write action scenes, apparently, as I've read a LOT of bad ones--this one is good). It's fun and it's got some great social commentary woven in! So far, it's good. I'm enjoying it. It's keeping my attention. It's well-written and structured. It's got fun characters and dialogue. It works.

An amazing first book from a newly published author. This work is very approachable by even the most casual Sci-Fi fans. The author has put together a host of engaging characters - each with a complex amount of depth. Like a chess grandmaster, the author left characters in reserve only to introduce them in the end in a devastating and fascinating manner. Many writers are able to weave an amazing story only for it to all fall apart at the end. His story started off strong and built from there. This book might have one of the most satisfying, leave 'em wanting more endings I've ever read.